Society is changing. We are getting older, live longer and fewer children are born. One fifth of the European population was over 65 years old in 2017 according to the EUROSTAT survey, and the trend towards an ageing society will gain momentum in the coming years. This ongoing Europe-wide demographic change causes an ever-ageing workforce, which poses challenges to many societal aspects, and also affects the educational sector. 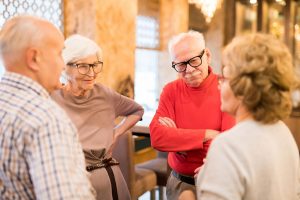 Learning and education gives us the chance to rethink the generational relations. Instead of separation, we need solidarity between different generations to fight social exclusion, ageism and deficit perspectives on elder people. Repeatedly one doesn’t hear and speak of “well- earned retirement”, but much more of a “pension shock” that awaits you after your working life. It may manifest itself as a feeling of no longer being needed, which in the worst case and can lead to severe depression. This does of course not hold true for everyone recently retired, but the last day of work definitely marks the beginning of a completely new phase in life. According to the American Institute of Stress, retirement is ranked 10th on a list of life’s 43 most stressful events.

The combination of these contexts led the project consortium to develop this project idea, as strategies to encounter these problems are still rare. Although the approach of IGL is not completely new, the setting of young people teaching elderly, especially in the context of technology, strongly predominate so far. With the AGE:WISE project a major change of roles in IGL is initiated.

We use cookies to ensure that we give you the best experience on our website. If you continue to use this site we will assume that you are happy with it.Ok